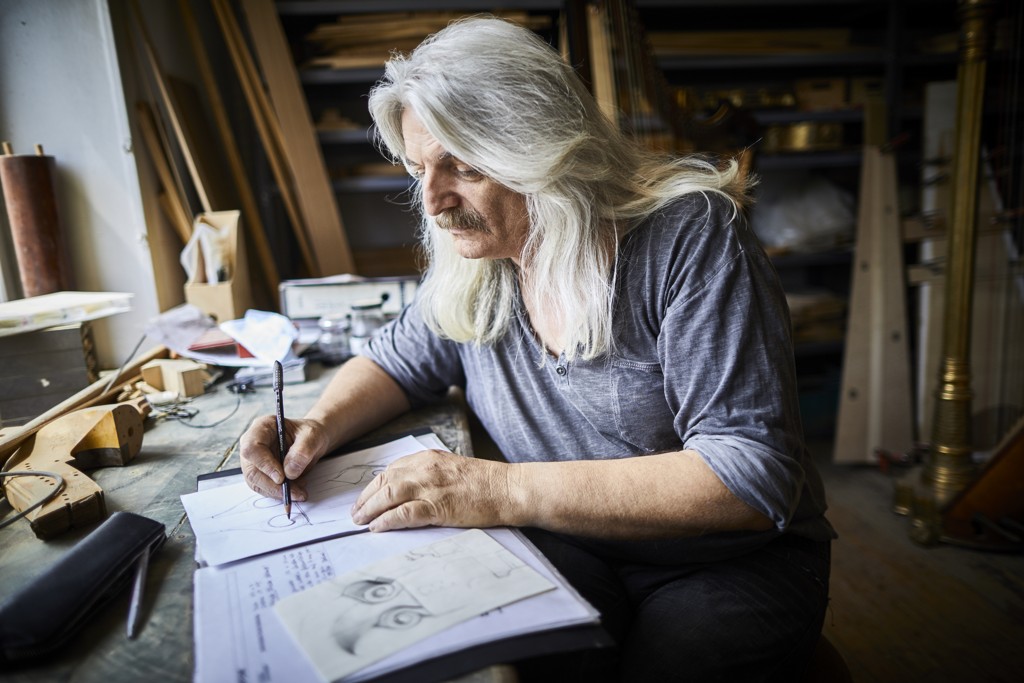 This description sets out the fundamental principles underlying Rainer M. Thurau’s understanding of the modern-day making of early harps – as innovative reconstruction, but also new creativity, based on historical models.

THE ACOUSTICS OF HISTORICAL HARPS

The outward appearance of a historical harp cannot take first priority for any serious maker of early harps. Attention is given rather to the musical functions of a particular harp-type (during the period in which it first appeared) and the associated acoustic requirements.

For Rainer M. Thurau, acoustic authenticity is just as relevant as tone-projection and excellent sound characteristics in any of his reconstructions, alongside his research into the integration of early harps into the particular sound-worlds  developed by Early Music ensembles as they work with historical performance practices. In this context, it is of paramount importance for Thurau that the harp-makers of past centuries, just like the early masters builders of lutes, cembalos and violas da gamba, must have regarded Sound as the highest priority, even if these instruments sometimes display an abundance of decorative ornaments, in particular in the renaissance and Baroque periods.

Through his study of  lute-making (in particular his participation in a lute-making seminar given by the American master luthier Robert Lundberg at the end of the 1970s), he realised that in many categories of historical plucked and bowed string instruments, simple, undecorated instruments (ideally, focusing more on golden ratio aesthetics than on appearance) were preferred by professional musicians because of their superior sound quality.

Rainer M. Thurau follows this philosophy in the planning and building of historical harps.

Historical harp making is an applied art which replicates, reconstructs and – with the best intentions – creates  “copies”.

But creating credible copies, intended to represent authentic instruments from entire epochs, presupposes that there is a sufficient number of original instruments, as genuinely representative examples of the typical construction and acoustics of each epoch.  A single original (or a very small number of surviving instruments worldwide) does not necessarily represent accurately a whole era.

The great majority of original instruments have been lost or destroyed. The assumption that one or other surviving instrument represents an entire epoch inevitably leads to an unrealistic evaluation of those instruments and – disastrously – to the creation of copies which reflect an utterly false impression of period sound characteristics, and of the skills and aims of previous masters of harp-building.

Nevertheless, in reconstructing historical harps based on originals in museums and private collections, or on paintings by Old Masters, Rainer M. Thurau still pays attention to every detail in order to replicate as accurately as possible appearance, architecture and load-bearing construction , whilst simultaneously ensuring structural reliability.

However, as has been mentioned, there are only a few surviving originals from the 10th to the 17th century. Moreover, most of these are demonstrably rarely-used showpieces and objets d’art from stately homes. They are displayed in museums today to be admired as historical objects without consideration of their acoustical significance. Uncritical copying of these harps without taking this fact into account frequently leads to highly unsatisfactory acoustic creations which are nevertheless offered up by contemporary harp-builders as  “authentic”.

We should rather assume that harps of the greatest musical value did not survive over the centuries, due to their particularly delicate and fine architecture – certainly the result of efforts by musical instrument makers of previous centuries to optimise acoustical properties – and because they were used more for music-making, preferred over inferior-sounding instruments.

This hypothesis is supported by historical illustrations documenting harps with sound-boards stabilised (for example, by metal bracings) in order to prevent them from breaking, and by the simple design of the necks of chromatic harps with up to 100 strings: such instruments were unlikely to survive over centuries. The assumption that the best harps probably had a much more refined design than  the generally very heavy instruments found in museums today (consider the extremely light-weight baroque harps from Spain in comparison to some of the surviving chromatic harps from Italy and Germany) goes a long way to explain the discrepancy between the immense historical significance of the harp and the notable lack of surviving examples.

We can only wonder that, until the replacement of the Italian baroque harp by the harpsichord , the harp was considered the basso continuo instrument par excellence; and that, for this reason, there must have been an abundance of very finely-worked chromatic harps – instruments which also had to fulfil the acoustic demands of an increasingly complex instrumental line-up within ensembles. Yet hardly any of these chromatic instruments have survived until the present day.

Fragile baroque harps surviving in Spain, exquisitely crafted theorbos, subtly arched, lightweight violas da gamba and delicate spinets indicate that amongst harps too,  there must have been instruments whose delicate design produced sound characteristics of beauty and projection that – alas! – can only be imagined today.

For all these reasons, Rainer M. Thurau considers and copies modern-day museum specimens very selectively and with caution. Moreover, in many cases, changes to the structure of many of these rare specimens as a result of centuries of crude repairs and improper replacements of severely damaged original parts mean that these instruments unfortunately give only a hint of the level of craftsmanship in harp-making of the past.

Reconstruction on the basis of historical illustrations and paintings by Old Masters provides the possibility of interpreting the instruments depicted just as artistic representations in their entirety reveal meaning to Historians of Art. This facilitates certain essentials of harp-reconstruction, after which Rainer M. Thurau elicits the appropriate acoustic properties and functional playability for each reconstructed instrument.

It is remarkable that in most iconographic representations the majority of the harps depicted, especially from the baroque, have hardly any decorations. Compared with the richly decorated Barberini harp and Arpa di Laura (also known as the Arpa Estense), numerous representations of modestly-decorated harps prove that harp-makers of former times prized the harp as an acoustic instrument more than for its magnificent outward appearance. Thurau follows this tradition, concentrating on acoustics, the aesthetics of form,  the playability and reliablity of his reconstructions, and dispensing with unnecessary and excessive decoration.

Ultimately, the value of a historical harp as a musical instrument is shown not by attempting to smother it in rich decoration, but rather by the serious historical harp-builder’s purposeful striving for convincingly authentic sound-worlds of harps from widely-differing periods.

Re-creating early harps requires considerable knowledge of, and experience with, historical instruments and their construction. For more than 37 years Rainer M. Thurau has produced a great number of historical replicas from various periods, seeking to enter into the modes of thought and practice of early masters, and developing an understanding for the harp as part of the complete instrumentarium of each particular historical era. This creates possibilities which transcend the limits of originals in museums and iconography, as has been explained above.

Following many measurements of instruments in museums and the building of many replicas of those instruments between 1977 and 1984, Rainer M. Thurau reviewed his ouevre in 1985, coming to the realisation that producing replica harps cannot be compared to building lutes, violas da gamba, harpsichords, wind instruments etc. After all, there are numerous and mostly excellently preserved specimens of those other instruments in many museums worldwide even in the hands of instrument-makers.

Thurau’s own historical creations, e.g. CELLINI, GALILEI, ARPA DA VIAGGIO, fulfil all the criteria for historically genuine instruments in terms of acoustics, architecture, art history and design – and, as a result, they seem so authentic that even knowledgeable musicians and musicologists sometimes mistakenly assume that these re-creations are replicas of museum specimens.

Every model goes through one of two years of planning, before the first instrument is built. This long development period ensures that the re-created model fulfils in every respect the requirements of early musicians and ensembles as well as Rainer M. Thurau’s own demands for high quality, and that it is in line with his uncompromising aim of creating an instrument which can be credibly assumed to have existed in this specific design, appearance and with this sound.

The historical models presented on this website correspond to the entire repertoire of early music and are sufficient for all purposes. However, on behalf of museums and musicians Rainer M. Thurau also builds harps created primarily according to specific historico-cultural or musicological requirements. He also designs harps to satisfy a client’s particular wishes – , with the proviso that the desired instrument must reflect the high acoustic standards of Rainer M. Thurau’s work.

Back to Collection of Early Harps